Surfing Made Me Choose Miyazaki
～ International Student from Guatemala ～

First-year doctoral student at the University of Miyazaki Interdisciplinary Graduate School of Agriculture and Engineering.
Born in Guatemala, 1993. 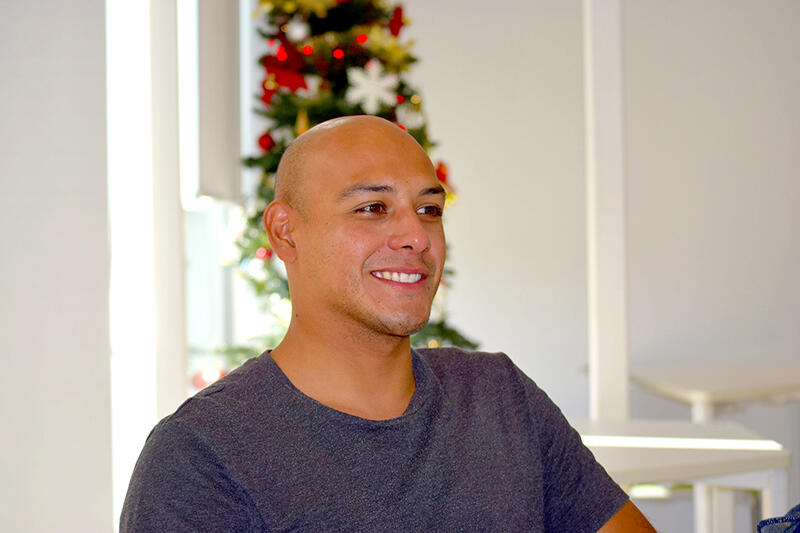 Guatemalan graduate student Santiago Morales José Rodolfo was born in Guatemala City, the capital of the Central American nation of Guatemala, and lived there for 23 years until he graduated from college. He then applied for and received an Embassy-recommended Monbukagakusho Scholarship to study in Japan. In April 2018, he joined the University of Miyazaki Graduate School of Engineering as a research student, and in October 2018, he started his master's course at the same faculty. In October 2021 he went on to start his doctoral studies at the University of Miyazaki Interdisciplinary Graduate School of Agriculture and Engineering. Under the guidance of Associate Professor Sekito Tomoo, he has been researching the effective use of fly ash produced by incineration plants and factory boilers.

Having picked up surfing as a hobby while he was a college student in Guatemala, he now heads to the beach at least three times a week. He even makes his way to the leading big wave surf spots in the prefecture, attacking them with determination. In addition to the sea, he also loves the mountains and actively participates in beach cleanups and other environmental protection activities.
Japanese dishes he likes are grilled chicken thighs, chicken nanban and ochazuke (tea poured over rice). He especially likes the katsuo ochazuke that comes with the katsuo aburi ju teishoku (broiled bonito set meal) from the local teishoku (set meal) restaurant Bibin-ya in Nichinan. On weekdays he cooks for himself, often preparing Guatemalan dishes similar to taco rice. Although his native language is Spanish, he also speaks fluent English and Japanese.

Ｑ．Please tell us what brought you to Miyazaki.

Originally, I thought that after graduating from college, I would move to a developed nation like the United States and find work there, but in my fourth year of college, my advisor urged me to continue researching. That might have been the first stepping stone that would lead me here. My advisor was a Bolivian woman who had received a scholarship from the Japanese government and earned her degree in Japan. With that in her personal background, she told me about the Embassy-recommended Monbukagakusho Scholarship as a means for me to continue my path as a researcher.

Except that in order to get the scholarship, one had to take a test, and getting selected wasn't going to be easy by any means. I had nothing to lose by trying, so I went ahead and submitted the required documents, including all of the findings from my research up to that point, and not only did I pass the first selection round, I also made it through the interviews of the second round. I was really quite lucky.

Ｑ．But did you know anybody at the University of Miyazaki?

Not only did I not know anybody, I had never even heard of Miyazaki before.

When it comes to the Embassy-recommended Monbukagakusho Scholarship, shortly after receiving the acceptance letter, you have to find a teacher at a university or research institution to accept you, or else you won't be able to come to Japan. Up until then, the only Japanese cities I had ever heard of were maybe Tokyo, Osaka, Hiroshima and Nagasaki, so I started out by looking for researchers working in fields similar to mine at universities in those cities. But having lived in Guatemala City for my whole life, I began to think that if I'm going to live in Japan, I would like to go to a regional city with rich natural surroundings, where I would be able to interact with locals. I could visit Tokyo or Osaka at any time, and there are lots of foreigners there anyway.

With that in mind, I searched for researchers in regional cities who worked in fields similar to mine, as well as universities endowed with a good environment for surfing. I discussed this with embassy staff. One of them had studied abroad at the University of Miyazaki and recommended it to me. I immediately contacted the university, and I was fortunate to be accepted.

I had searched extensively on the internet, but I couldn't find a university that had both a research environment that suited me, and a surfing environment. I was really quite lucky that one of the embassy staff members had received their degree at the University of Miyazaki. It goes without saying that surfing made me choose Miyazaki for my studies. 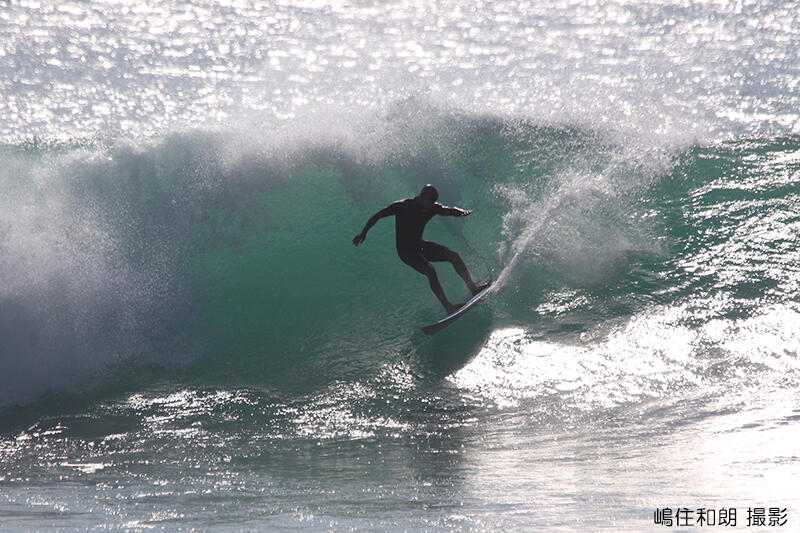 Ｑ．Please tell us about your research.

In Japan, incineration is a standard method of waste disposal, but it produces leftover fly ash. Much of the ash is discarded in landfills, but the space is limited, and the costs associated with the disposal are becoming a heavy burden on companies and municipalities, so I'm researching whether the ash can be safely reused as material for building infrastructure, such as roads.

Even though past research has shown that there are many effective uses of incineration fly ash, there hasn't been much progress in the practical use of the ash. One of the major factors preventing its effective use is the fact that even small amounts of fly ash contain harmful substances that could cause environmental contamination. I have been running chemical experiments to verify the safety of the fly ash coming out of a particular factory. In my doctoral program I've been looking into whether it's possible to safely utilize incineration fly ash as construction material on an even longer term in the environment. My research has mainly consisted of using a computer program to make forecasts.

Waste incineration is a disposal technique mainly used in developed countries, but I believe the technology will be used by many countries around the world in the future. I'm working hard so that my research can become a tool to help bring about the safe recycling of incineration fly ash. 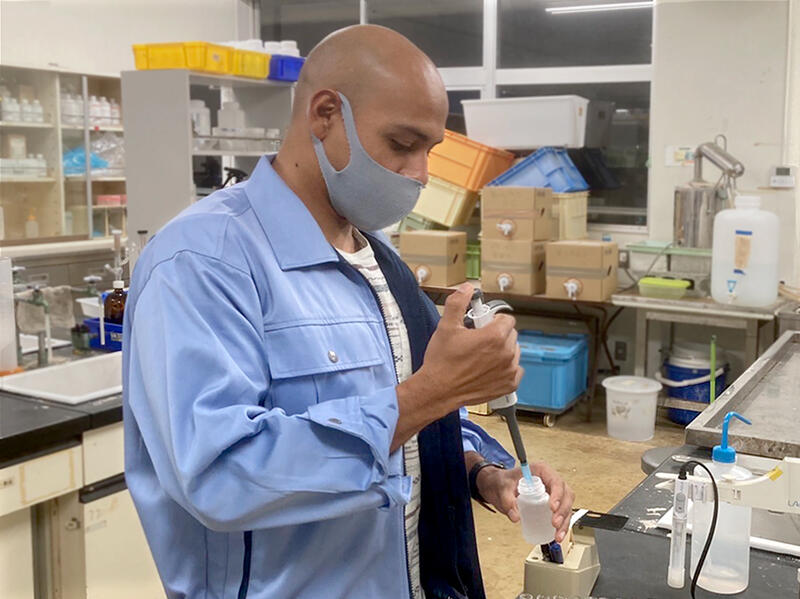 Santiago at the laboratory

Ｑ．What surprised you the most when you came to Japan?

It's got to be the safety. The first time I rode a train in Japan, I was surprised to see a child - maybe seven years old - riding the train alone. I was also surprised to see young women walking alone, even at night.

Guatemala City, where I was born and raised, unfortunately has a huge number of robberies and other crimes when compared to Japan. One cannot say it's a safe city. You would never see a young woman walking alone at night.

Ｑ．What are your impressions of Miyazaki?

I'm very glad that I chose to study at the University of Miyazaki.

My advisor Professor Sekito is very kind and polite in the way he gives guidance, and strongly encourages me to do the research I want to do. The local Japanese people have also been very kind to me.

I also think there aren't many universities anywhere in the world where you can reach a surf spot just ten minutes away by car. Not only that, but the beach where the 2019 World Surfing Games were held (Kisakihama) is also just a ten-minute car ride away. It's almost too good to be true. There are several big wave surf spots along the Nichinan coast, with an abundant variety of waves coming in. As far as I know, out of all the universities in Japan, this university has been blessed with the best environment for surfing. I don't just go on weekends and early weekday mornings. Sometimes when I get stuck in my research, I head out to the beach even in the middle of the day to refresh myself with some surfing. It's something that I can only do because I'm at the University of Miyazaki, and it's precisely because there is this environment here that I can conduct good research.

Miyazaki has a lot to offer besides the sea. I've hiked mountains all across the prefecture, but I especially love the view of the Onamino Ike lake close to the Ebino Plateau (Kirishima Kinkowan National Park). 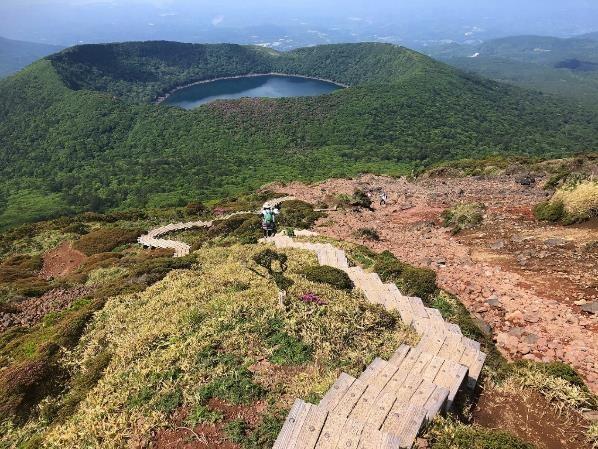 View of Onamino Ike from Mount Karakuni (photo taken in 2021)

In his research he's using methods that are hardly used by anybody in the field of waste disposal anywhere in the world to develop ways to evaluate the safety of waste incineration fly ash. It's a topic with big challenges. He collects and analyzes water samples from the lab equipment practically every day, studies new programs, and so on. I'm sure it's quite an intense life as a researcher. But far from being overwhelmed, he actually seems to be enjoying the challenge. There's a certain toughness in him. He comes to the lab every day and takes his research seriously.

There are around ten undergraduate and master's students at this lab, but Santiago is the only doctoral student. As such, he's taken on a coordinating role, even if he's a foreign student, and in doing so, he's lightened my workload.

Research isn't something that produces immediate results, and there's an aspect of it that's sort of like an endurance test. In many cases, you need a lot of stamina and patience. You can't build up such stamina and patience through research or university study, so I think it's necessary to take hobbies and interests (i.e., play) seriously. Santiago has the ability to cleanly toggle the ON/OFF switch of university life when he does his research, so he's able to come up with fresh ideas. The life of a researcher demands patience and focus, and I believe that Santiago possesses the important qualities to succeed. I hope that in the future, he will accomplish great things as a researcher, tackling international waste disposal issues. 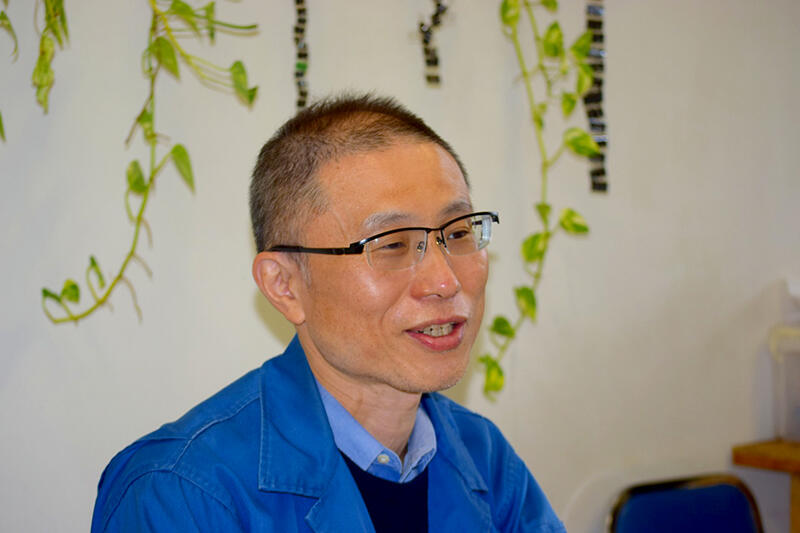 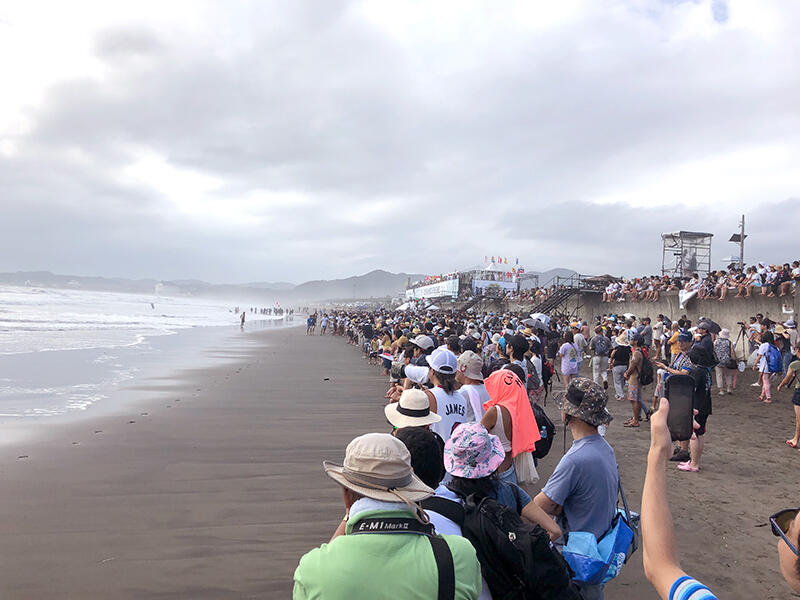 The 2019 ISA World Surfing Games held at Kisakihama. Surfers from all over the country move to Miyazaki Prefecture in search of good waves. Within Miyazaki, Kisakihama is especially well-known for consistently having good waves year-round, as well as for being accessible from the airport.